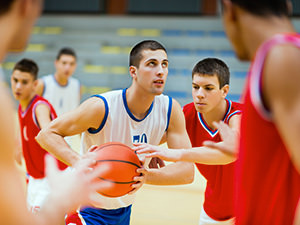 Founded in 1972, George Mason University (GMU) is an innovative, entrepreneurial institution with national distinction in a range of academic fields. GMU attracts 30,000 students each year from all over the world to its campus, located in the heart of Northern Virginia’s technology corridor near Washington, D.C.

George Mason Recreational Sports offers many outlets for students and staff to enjoy their free time outside of class. From basketball and cardio kickboxing class to weightlifting and swimming, the recreational facilities are a welcome escape for hard-working students and faculty.

With 30,000 students, 7,000 faculty members, and the surrounding community all taking advantage of GMU’s recreational facilities, recreation staff realized that, with an expanding department, its technological capabilities needed to expand as well.

When two employees from the software company utilized by the GMU recreation department decided to start their own company, GMU was offered a deal to transition to the “alpha” version of the software. However, as Nathan Dougan, Assistant Director of GMU Recreation Systems, notes, “The newly formed company bit off more than it could chew. For five years, we used this custom software package that did some of what we needed, but the functionality just wasn’t anywhere near where we needed it to be. Basically, we were pouring money into a black hole of enhancements that never came.”

The custom software lacked intuitive workflow, comprehensive reporting, and the bandwidth to support the recreation department’s large volume of members and activity.

Already in the preliminary stages of researching new software options, Dougan received a timely phone call from ACTIVE Network. “I got a basic rundown of the benefits of Class software. We held a meeting, and ACTIVE evaluated our needs and presented a demo.”

"We are tremendously more organized, productivity is increasing across the board, and we’re able to explore new and innovative ways to enhance student, faculty and community life." Nathan Dougan, Assistant Director
of GMU Recreation Systems

The recreation department went back and forth with ACTIVE over the next several months to understand how ACTIVE’s Class software would meet its needs, in regards to both functionality and finances.

“It wasn’t a difficult decision to select Class. We looked at other software packages, and when an associated facility told us it was extremely dissatisfied with ACTIVE’s competitor, our decision was made. Furthermore, ACTIVE had gone through more platform changes and troubleshooting and we felt confident in the software’s capabilities.”

The software delivery was received in mid-November of 2008, followed by a business process review with ACTIVE in mid-January, and a physical implementation of the software in February 2009. Following implementation, procurement of a server, and software training, the Class system went live in mid‑August 2009.

“Class has been functioning beautifully. Its logic forced us to take a deeper look at our organization’s philosophy, goals, and basic infrastructure. After the implementation, we had a new sense of cohesion across the department and our work is noticeably more streamlined.”

“The biggest change we’ve experienced since implementing the new system occurred on the administrative end. The increased ability to audit transactions, trace money and run reports has made an astronomical improvement in our operations. The reporting capabilities of the system are the real gem.”

In addition to improved reporting capabilities, Dougan notes that productivity in the processing of revenue and financial reporting has increased dramatically. Prior to Class, when Dougan would arrive to his office on Monday to reconcile the weekend’s revenues, he would spend up to five hours. Now, he notes, it takes just 30 minutes to reconcile deposits, if that.

“Our finance department now loves us. My good friend in that department just raves about the Class program. By automating our processes, we eliminated two points of human data entry – at the recreation center and at the finance department – which in turn, eliminates two points of potential data entry error. We’re seeing significantly less errors. The single, most acute area of improvement is the financial export function because it has cut significant man hours. It’s just amazing to watch.”

Dougan also notes that the new software has allowed the department to enforce more concrete policies. “Our old software did nothing to prevent employees from making caseby- base exceptions and overriding rules if they did not know otherwise.”

Even members have noticed positive change at the recreation centers. What used to take 10 to 12 seconds for students to check in has been truncated to a mere couple of seconds. The students have even asked staff members if the department is going green, as they’ve witnessed a significant reduction in paper forms.

To put the entire software implementation experience in perspective, Dougan notes that, “It’s been a long road, but Class has been overwhelmingly beneficial. There’s no way that an organization will implement software like this and not hit barriers. We are tremendously more organized, productivity is increasing across the board, and we’re able to explore new and innovative ways to enhance student, faculty and community life. The revenue, productivity and opportunity to expand have made Class a great solution for us. Though still too early to offer concrete numbers, I believe this system will improve our bottom line from the standpoint of raw productivity and the new revenue streams we’re able to explore by understanding our programming demands.”

Ready to see more?
Get started with ACTIVE Net®.